The following article was written by ecologists Trevor Codlin and Tristan Norton and was published in a slightly shortened version in the Hampshire Biodiversity Information Centre (HBIC) Newsletter, Issue 18. 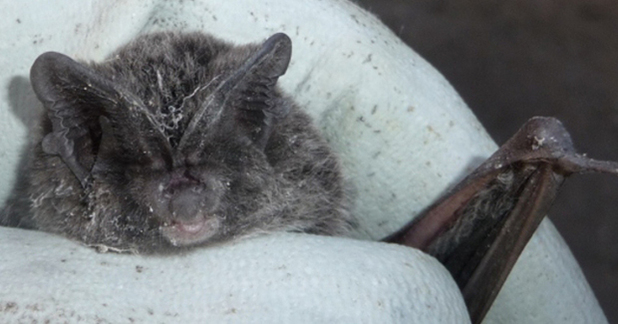 The western barbastelle is a medium-sized bat with a very distinctive appearance. In the hand, the key characteristic is the very dark, blackish shaggy fur. There is usually a silvery sheen to the fur, giving it a silky appearance. The face of the bat is also very distinctive, having a dark-coloured pug-nosed appearance with distinctive folds or pleats on the rear edge of each ear. The ears are joined together at the forehead.

The western barbastelle bat is one of the rarer British bats, being found generally in the south and central regions of England and Wales. Beyond Britain, the species is found widely across mainland Europe, reaching the Balkans in the east, Iberia in the south and the Baltic states in the north. The species is also present in North Africa, the Canary Islands and the Balearics. It is replaced in the east by the closely-related eastern barbastelle B. leucomelas which is found from the Caucasus, through the Middle East and Arabia, across central Asia to China and Japan.

Throughout its range, the western barbastelle is seldom numerous, with the majority of breeding colonies comprising several tens of individuals, although winter roosts can number in the high hundreds and even thousands in central and southern Europe.

In Britain, only a handful of breeding sites are known. Maternity colonies have been confirmed in Devon, Somerset, Wiltshire, Pembrokeshire, Hampshire, West Sussex, Cambridgeshire and Norfolk. Maternity roost locations include abandoned mines, mature trees and, in Norfolk, the only maternity colony within a building (JNCC, 2012).

Based on current knowledge, the distribution of the western barbastelle in Hampshire is concentrated within the New Forest. Besides the Forest, there is the well-known and studied maternity colony at Mottisfont (afforded SAC status) as well as a few scattered records in the north-east and odd locations elsewhere: the Hampshire Biodiversity Action Plan (BAP) describes just 17 records.

Over several years, ECOSA bat surveyors have been encountering western barbastelles at a number of sites across the county (Figure 1). Over the last few years, western barbastelle bats have cropped up at Winchester, West Meon, Alton, Selborne, Whiteley, Havant, Cheriton, Pilley, Breamore and on the Isle of Wight to name a few. Habitat associations have included urban areas, open farmland and woodland. It is clear from these records that the western barbastelle is a much more widespread species than currently thought and is severely under-recorded. 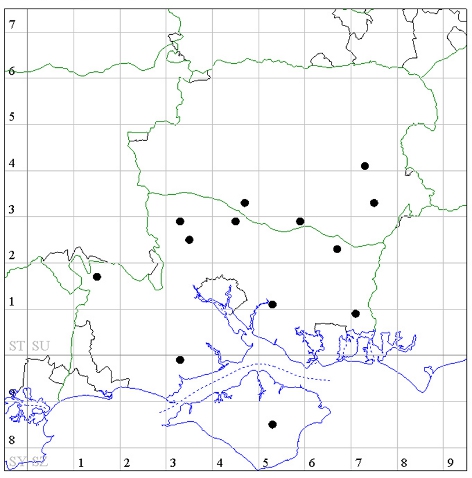 The western barbastelle is most often associated with well-wooded landscapes, chiefly being a bat encountered in mature deciduous woodland although woodland edge and farmed landscapes are also used. It appears that the presence of large numbers of mature trees for roosting is an important habitat component over most of the species' range.

The species is known to travel great distances and therefore, in its range, this bat may be encountered in almost any habitat type. Radio-tagged animals in Norfolk have been shown to visit urban centres, golf courses and shorelines so it appears that habitat choices vary greatly.

Buildings are frequently used for roosting, with underground structures such as tunnels, mines and bunkers especially important during winter. Individual bats will often be found roosting in rather exposed locations such as behind loose tree bark or behind roof tiles low down on buildings.

The western barbastelle feeds predominantly on smaller insects, typically moths, flies and beetles: its small mouth and weak teeth are incapable of dealing with larger prey items (Schober and Grimmberger, 1987). Prey is caught via direct and skilful flight which is generally low-level (1 to 5 metres height) although canopy-height hawking seems common and flight is often punctuated by bouts of fluttering (Stebbings, 1986).

Much is still to be learnt of their breeding biology. It appears that small numbers of females will be attended by a single male, with one, sometimes two, young generally born in July or August. Generally speaking, the western barbastelle seems to live a relatively solitary existence for much of the year.

A typical western barbastelle call will have very distinctive characteristics: each individual call is very monotonal, with no discernible change in pitch throughout a sequence of calls. With a very clear sequence of calls you will hear a noticeable 'two-part' structure comprising a strong lower-pitch element alongside a fainter, higher-pitched element. This call comprises a short, loud Constant Frequency (CF) - Frequency Modulated (FM) sweep with a peak frequency of 32kHz, immediately followed by a quieter call at 34kHz. This call therefore has a narrow bandwidth suited for open environments and is generally indicative of a commuting bat.

In confined/cluttered locations, a longer CF - FM sweep is used which peaks at 38 and 32 kHz . The longer bandwidth is indicative of a bat flying within a cluttered environment such as a building or woodland, where more detailed resolution is need for navigation. When listened to on heterodyne (or real time), this call is very similar in amplitude and frequency to the closely-related long-eared Plecotus species, and produces a quiet 'shuffling' sound - the feeding behaviour of both bats is similar.

Typically, when carrying out bat surveys, surveyors set their detectors to between 45 and 55 kHz, since this is the frequency that produces the highest number of registrations - this will generally pick up most pipistrelles and most Myotis species i.e. a large chunk of our resident bat species. However, given the short bandwidth of the commuting calls of the western barbastelle, and the variability in amplitude, a detector set to this frequency will likely miss a passing western barbastelle bat. Being equipped with Pettersen D240x time expansion bat detectors, linked to digital recorders, has proven to be the principle factor in identifying western barbastelle bats. The time expanded call on playback produces a distinctive flat tone, which is completely different to any other time expanded call by a British bat species, and the sonograms produced are easily identifiable within analysis software such as Sonobat. The sonogram is also highly distinctive, especially using a time-expansion recording viewed using Sonobat software. The 'flat' nature of the call results in a characteristically neat lozenge-shaped call profile.

The following examples illustrate the variation in echolocation calls emitted by the western barbastelle; click on the images to hear the calls.

Figure 2 This is the typical western barbastelle call, and the most frequent call that we have encountered at ECOSA. The call has a very short bandwidth (usually between 29kHz - 35kHz) with a peak frequency of around 32 kHz. This is a two-part call with the main part having a very flat tone, followed by a higher pitched but quieter tone (not visible in this image) when listened to on time-expansion. This call could be easily overlooked when a detector is set to 45kHz. Click on the image to listen to the call.

Figure 3 A typical call of a western barbastelle bat flying within a cluttered environment or confined space, such as a closed tree canopy or inside a building. The bat is using harmonics to expand the band width of its call, which produces a three-part call. On heterodyne this call is very quiet and crackly, and very similar to long-eared bat. Click on the image to listen to the call.

Figure 4 This call was recorded in June in the Meon Valley. The bat was emerging from an area of dense beech woodland and flying along a woodland ride, whilst being harassed by a common pipistrelle. Note the very first echolocation (Left side), which is the two-part call emitted in a cluttered environment. As the bat emerges into the open, its call changes to the typical lozenge-shaped call. Unfortunately this call has suffered from clipping due to the bat being very close and the call very loud, but it is still possible to see how there is no overlap between the common pipistrelle call and the typical western barbastelle call. Therefore a detector tuned to 45kHz would miss this bat. Click on the image to listen to this call. 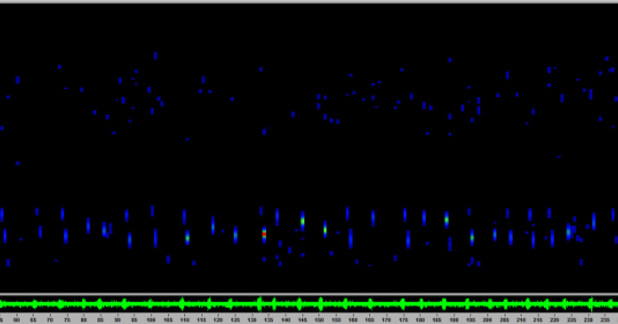 Figure 5 This call was emitted as two bats interacted within a dense woodland canopy. The first bat was already feeding within the canopy when the second bat appeared; the two then interacted for approximately 30 seconds before both flying off, one bat immediately returning. This call was recorded in mid-September and therefore may indicate territorial behaviour or social interaction between a male and female bat. Click on the image to listen to this call.

Schober, W and Grimmberger, E (1987). A guide to bats of Britain and Europe. Hamlyn, London.

Note: This article was updated on 7th December 2017.